A rare selection of works by Bill Traylor are available through BMS Art from a private collection.
Contact us for details. 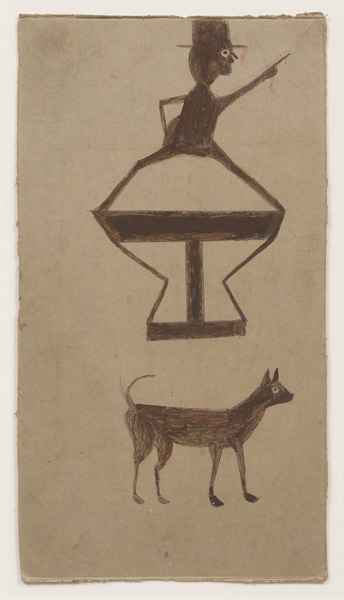 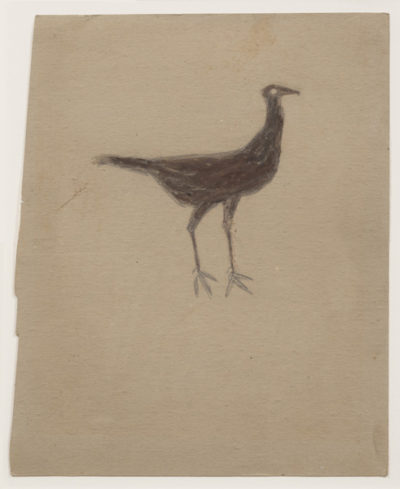 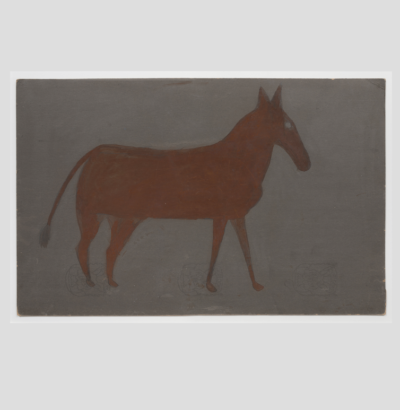 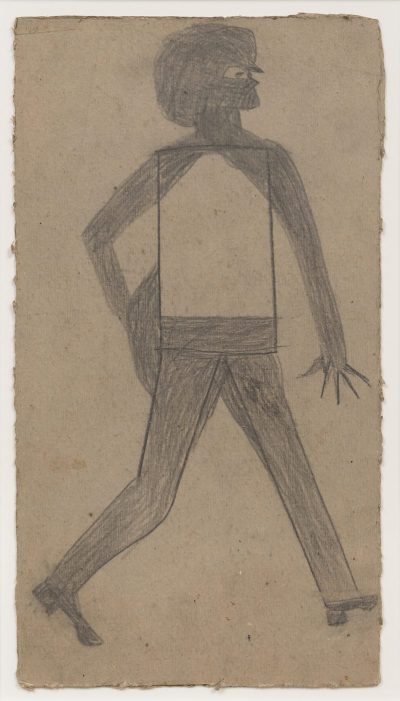 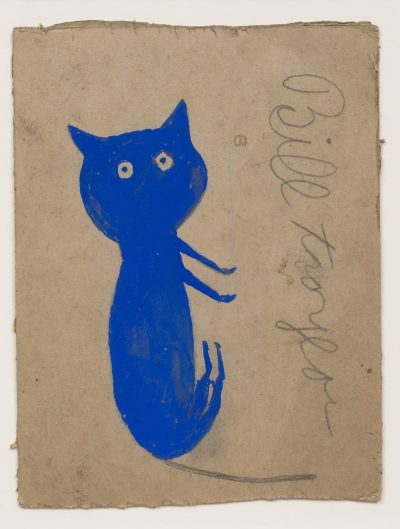 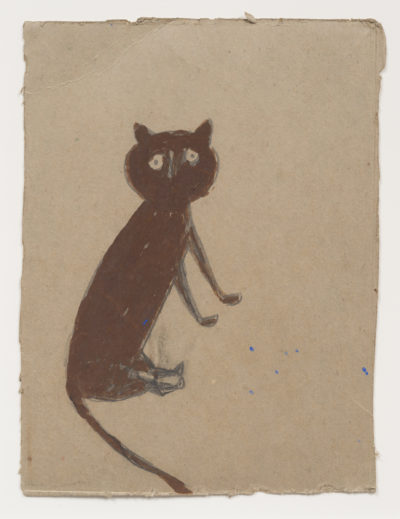 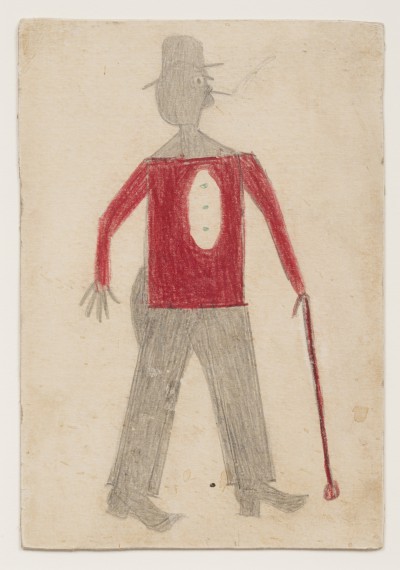 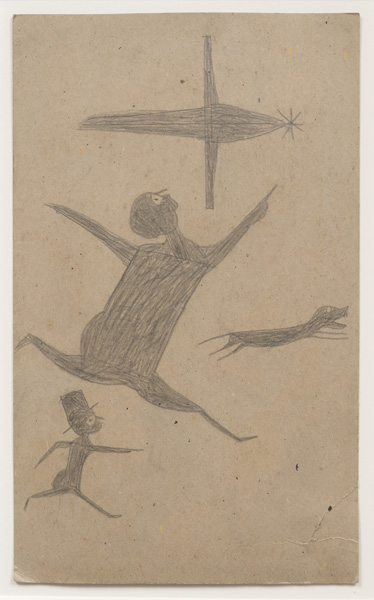 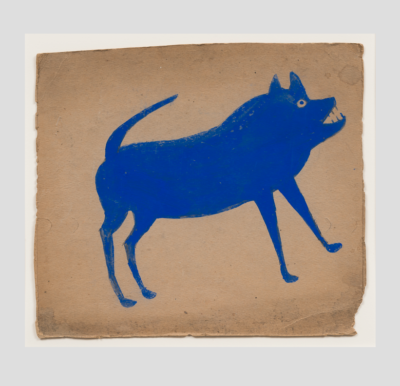 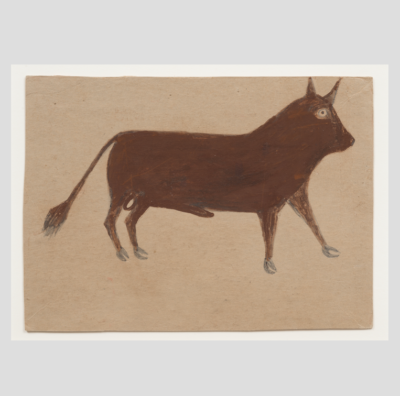 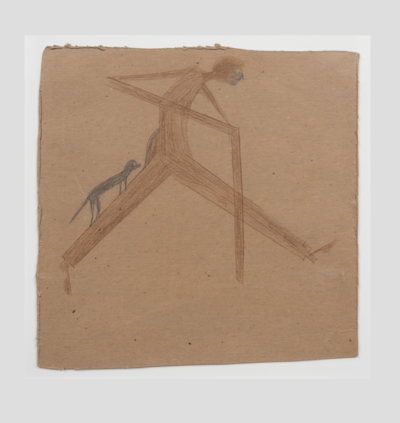 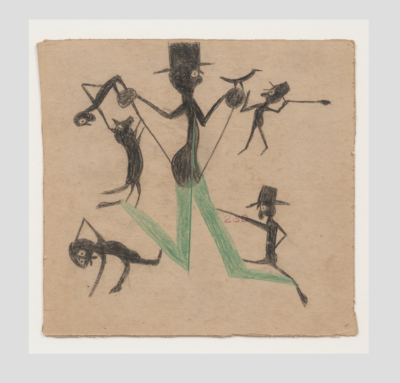 Traylor is known today through the large body of drawn and painted work he made during his years living in the Alabama state capital. In the segregated part of Montgomery, Traylor found work and lived successively in several different places. After about a decade there, Traylor’s strength declined, and he took to sitting in the neighborhood around Monroe Street, drawing by day and lodging by night with local business owners. His earliest extant drawings date to 1939 and were primarily done in pencil or colored pencil. Traylor’s artworks were saved by several members of a white artists’ coalition in Montgomery called the New South. Notable for the help they gave Traylor, in acquiring and saving artworks, and taking documentary photographs are John Lapsley, Jay Leavell, Ben Baldwin, Blanche Balzer and Charles Shannon (who would marry in 1944), Jean and George Lewis, Mattie Mae and Paul Sanderson, and several others. Charles Shannon saved the lion’s share of Traylor’s art and was instrumental in bringing Traylor and his work to the attention of a larger sphere several decades after Traylor’s death. The New South mounted a small show of Traylor’s art in Montgomery in February 1940, but it was the Corcoran Gallery of Art’s 1982 traveling exhibition Black Folk Art in America that brought Traylor’s work lasting and widespread attention.

Traylor drew and painted, mostly on discarded pieces of paperboard from the neighborhood, from around 1939 until shortly before his death in 1949. His images attest to his existence and point of view; they describe his memories of a hard, rural, racially fraught past, as well as the evolving African American urban culture that was taking shape before his eyes. Traylor never became literate, but his pictures became a language unto themselves. His visual depictions are steeped in a life of folkways: storytelling, singing, local healing, and survival. As these modes of expression are well known to do, Traylor’s imagery often holds veiled meanings and lessons underneath the veneer of simplicity or hilarity. Traylor became adept at creating pliable narratives; he experimented with allegory and abstraction and was able to convey a volume of meaning in deceptively simple images. The racial terrorism of lynching peaked between 1877 and 1950–Traylor’s adult lifetime. It was illegal, but in Jim Crow America it was rampant, and far too often, tolerated or endorsed. His abstracted “stages” are skeletal references to Montgomery, echoes of a building or fountain, but perhaps also an auction block where human beings were once sold as goods in the heart of the city’s Court Square, a few blocks from his environs on Monroe Street. Traylor’s complex and coded scenes evidence the balancing act that defined life not only for his community, but also for Traylor personally, as he tried to record these memories without drawing attention to himself for doing so.